Gardening Recipes
Craft Projects Photography
A few months ago, I found a beautifully dilapidated dresser set in an empty lot. I enlisted some family to help drag the four drawers to my backyard for a future craft… 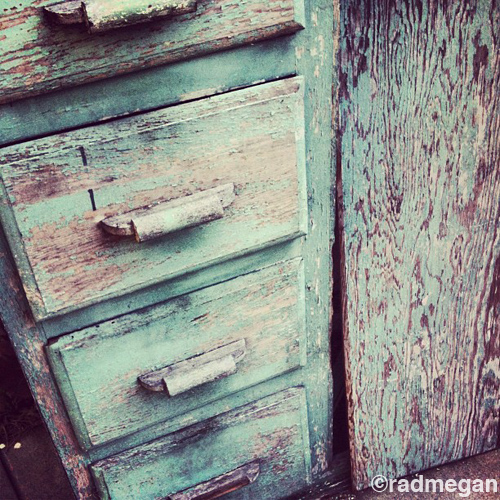 After receiving a friendly email reminder from Burpee, that it’s now a great time to plant fall and winter crops, I knew I had the perfect garden boxes waiting to happen. 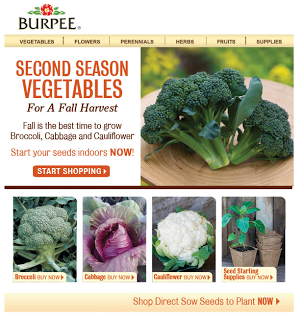 Since my darling nieces and nephew make a regular habit of harvesting the fruits, veggies and flowers in my garden, I thought that this was a great opportunity to let them choose what they would like to grow (and eventually, eat). I grabbed my stash of seeds, and called them over for a garden party. 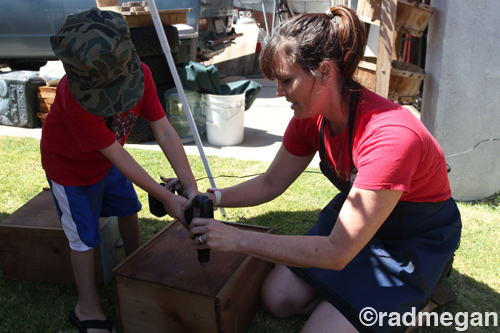 Since I have four nieces and nephews, and had coincidentally found a dresser set with four drawers, each child was given their own box to plant up, occasionally care for, and then harvest. We began with a lesson in power tools. I helped each of the kids use my cordless drill to put a few drainage holes in their boxes. (Note, these dressers have probably been baking in the hot sun for a decade, so chances are, they will begin to warp with regular watering. The holes may have been unnecessary, but I thought it was still important to teach them that potted plants need drainage.) 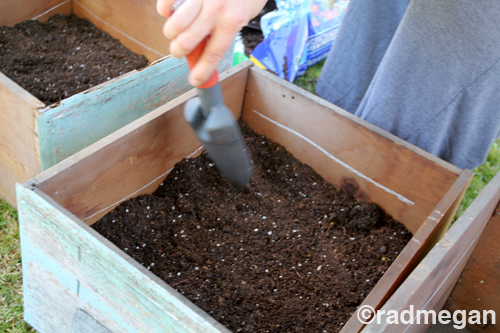 In order to streamline our morning and give everyone a task, I used a piece of chalk to draw “fill lines” inside each dresser drawer. Then, I handed out trowels and supplied two huge bags of potting soil. Even the littlest niece was happy shovel soil into her own garden box. 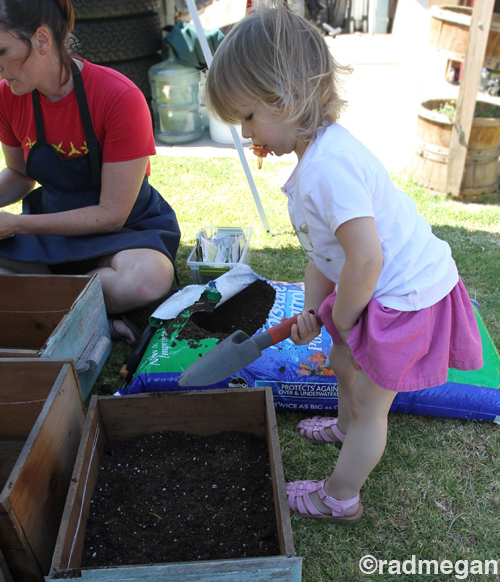 While a couple of kids (and my sister-in-law) filled boxes, the other kiddos chose seeds for their gardens. This task took quite a while, as we separated my seeds by season, and then by veggies or flowers, and then by size of the full-grown plant. Once we knew which seeds would work best for our climate and time of year, it was a little easier to decide on what to plant. 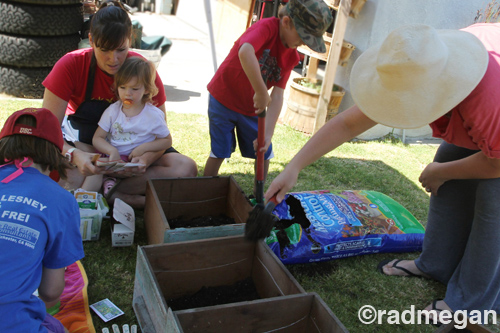 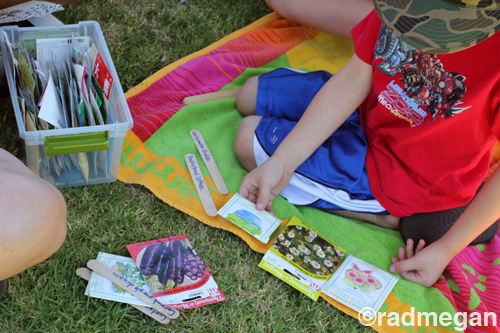 Choosing the seeds ended up being the longest part of our day, hands down. The kids ended up planting:
Watermelon radishes, various lettuces, various carrots, container zucchini, cosmos, chamomile, nasturtiums, California natives (a mixed pack I received as a wedding favor), beets and kale. For good measure, I threw a few gourds and broccoli seeds into a giant pot to see how they might do. I also planted garlic and several onions straight in the ground. 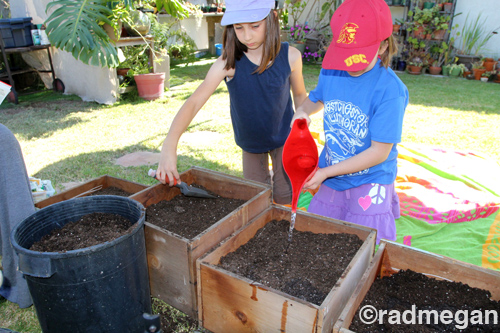 The kids watered their boxes while I passed out tongue depressors and Sharpies for plant tags. 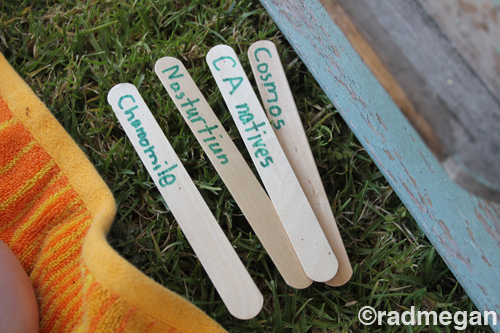 We double checked our seed packets to see how deep we needed to plant each kind of seed, used our trusty seed-planting devices (our fingers), and placed 1-2 seeds per hole. 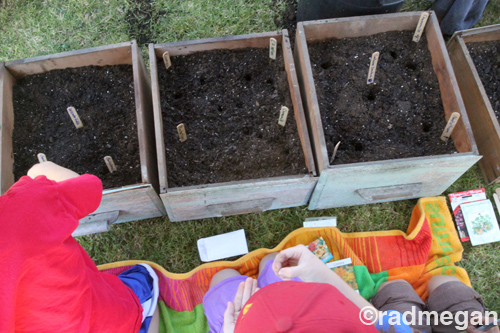 We covered the holes with damp soil, and carefully carried each planter from the shade of the lawn, over to my sun-soaked back garden. 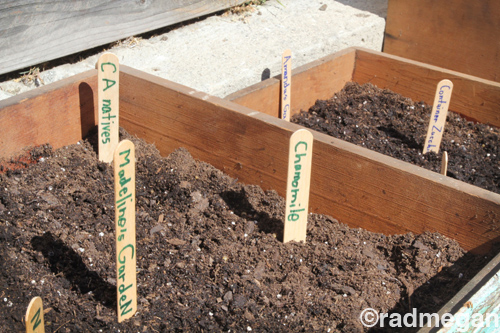 For now, the garden boxes are lined up side-by-side, but since a couple of my nieces planted container zucchinis that may get large, I’m considering spacing them out a bit. 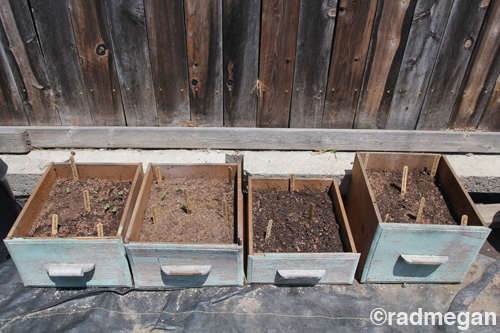 Originally, my sister-in-law and I discussed taking the up-cycled dresser gardens to her house so that the kids could care for them. But, ultimately, we decided that there’s a difference between teaching them responsibility, and setting them up for disaster. These kids have a pretty poor track record with keeping things alive (probably due to their busy schedules of play dates and summer activities) and since Auntie Rad is watering her own garden regularly anyway, we decided to keep the mini gardens at my house. 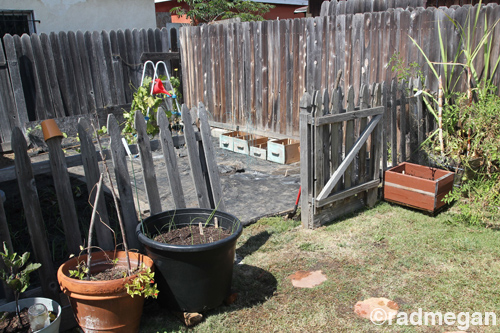 To keep the kids excited, I’ve been emailing them photos of their garden box growth twice a week. They planted their seeds last Thursday, and each garden already has lots of tender sprouts poking out of the soil! 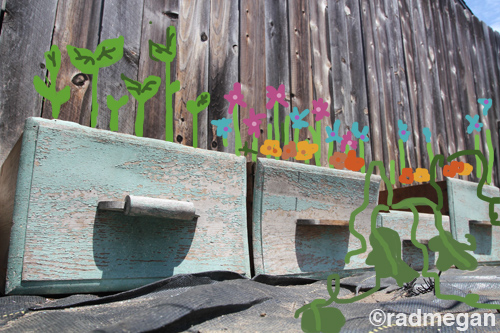 I can’t wait for their gardens to be filled with flowers and veggies so that they can feel proud of the work they did, and feel good about growing some of their VERY OWN food!
I’d also like to give a special thank you to my niece, Little K, for taking so many photos of this project. I showed her how to properly hold and and focus my DSLR, and she did an awesome job.

Getting Inky for Emberley
Warning: count(): Parameter must be an array or an object that implements Countable in /webroot/r/a/radme001/primary/www/wp-includes/class-wp-comment-query.php on line 399