Gardening Recipes
Craft Projects Photography
The Royal Wedding of Prince William and Kate Middleton will happen this Friday at Westminster Abbey, in London England. In honor of my little sister Katie, who will be watching every minute of the wedding coverage, live on television (and who I always thought would be a fantastic wife for Will), I crafted up two posh paper hats based on Kate Middleton’s incredible fashion sense. (Above, my two paper hats. Below, three of Kate Middleton.)

When I began crafting my hats, I knew I needed feathers. Kate M. LOVES her feathers! Personally, I think feathers are (beautiful, but) gross, so instead of using real ones, I made feathers by cutting up a catalog cover (the paper was a heavy card stock- almost like watercolor paper), and snipping tiny parallel lines throughout the feather-shape to give it texture and make it look less like a leaf. I wasn’t terribly happy with the pastel purple color of the catalog paper, so I grabbed a box of drawing pastels, and got my fingers dirty making some dark black plumes. I fixed them with a spritz of hairspray and set them aside. To accent the hat, I made a handful of multi-colored paper flowers (full tutorial on my paper flower post, here). I used glossy, heavy-weighted magazine ads for some of the flowers, and red construction paper for the rest. I laid out all of my supplies to assess what I had, and what more I might need (glitter, beads etc..). For the base hat with the long black feathers, I cut a paper plate into an oval, colored it red, and sliced a narrow wedge out of it (see lower left in the above photo). I folded the two end points together, so that the flat oval became a cupped “hat”, and glued them together with craft clue. For the base of the second hat, I used a piece of Origami paper (you might remember from my Year of the Rabbit post?), glued it to another paper plate for more stability, and cut that into a circle (leaving it flat). I grabbed two red, plastic produce bags to make a lovely netting for one of the hats, and some red tissue paper to make additional flowers. I was armed with craft glue, hot glue, and lots of clothespins to keep things in place as they dried. (The base of the red hat, after being colored with drawing pastels, wedge-cut, glued together, and coated in Mod Podge and red glitter.) After the base of the first hat had dried, I cut a tiny slit in one side (slightly off center), inserted the paper feathers, folding their ends down against the inside of the hat, and secured them with glue. I used my glossy and construction paper flowers to add some color around the base of the feathers, and glued them in place with craft glue. When the hat was completely dry, I put it on and used three bobby pins to keep it in place. My first Kate Middleton “Fascinator” was complete! For the second hat, I wanted the plastic produce bags to look like a mesh veil. With a hot glue gun, I attached the sides of the bag to the hat base (the hot glue will melt the netting slightly, making it both convenient and challenging to work with), and with the extra netting, I folded it over itself to resemble a flower. I melted some hot glue in the center of the mesh flower, and threw some silver beads into the center to A.) give a pretty accent and B.) hide the melted mess! Out of my remaining heavy-stock catalog paper, I cut out about 3 full flower shapes and 4 individual petal shapes, coated them in Mod Podge, and then used different hues of red glitter on each. When all of the layers were dry, I stacked them on top of one another, gluing each layer down upon the next with a dot of hot glue. I placed my glittery flower over one of the points where the netting had been glued down (covering the mess, and further securing the netting.) I made a few tissue paper flowers and tucked them up against the net flower, securing them with craft glue. When my entire hat was dry, I hot glued it to a plastic headband, wedging a piece of cardboard under part of the hat to keep it at an angle as the glue dried. 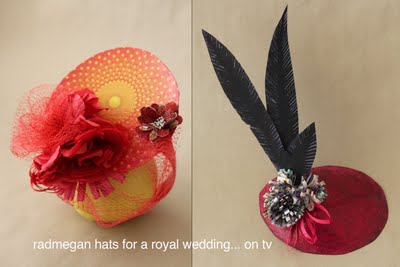 When both hats were done, I called my girlfriend Farrah over to model them with me. We got teary-eyed just thinking about how beautiful the Royal wedding will surely be…. Coverage of the Royal Wedding will begin at 1am in California. Since I know that my little sis (who gave me that framed photo of Prince William in a Santa hat by the way) will be watching all night long, Farrah and I dressed up in pajamas, and made some English tea in honor of Katie (my sis, not the soon-to-be-princess). Katie, if you are reading this, one of these hats is all yours… just let me know which one you want.

To everyone else, I hope you enjoy these two Kate Middleton-like DIY Fascinator hats. If you end up making your own, and watching the wedding in your fancy hats and pajamas, please send me photos. We’re in this together.

Craft: A Birthday Card for Children’s Book Author & Illustrator Tomie dePaola
Warning: count(): Parameter must be an array or an object that implements Countable in /webroot/r/a/radme001/primary/www/wp-includes/class-wp-comment-query.php on line 399