I’ve started seedlings in containers all over our house. After Punxsutawney Phil saw his shadow, I sprang into action getting my seeds, my garden, and myself ready for an early spring. Getting myself ready for spring took little more than thumbing through my seed packets and taking inventory of what seeds I collected last year. Getting my seeds ready included putting handfuls of dirt into any container that would hold still long enough to sprout an assortment of wee green shoots. And part of getting my garden ready included a dirty job that I’d been thinking about for weeks, but finally got some traction on when I went to visit my parents in San Diego last month. While there, my mom, aunt and I went to my mom’s favorite nursery, Walter Andersen. I had been showing tremendous restraint by only picking up a few packets of seeds, and then at check-out I spotted them; sacks and sacks of red worms. Naturally, I had to buy a 10-pound bag of worms and bring it home to make a worm bin. Why would any sane person bring home a 10-pound bag of red worms? Because both worm castings (worm poop) and worm “tea” (what happens to the worm poop after it has soaked in water and oxygenated) are incredible fertilizers, and one of the key ingredients for the big fat vegetable harvest I’m counting on this year.

Once I secured the red worms (which can also be found slowly, but for free by overturning pots in the garden, or by putting wet cardboard on the lawn or garden at night), I needed two 8-10 gallon dark plastic storage boxes, a drill with 1/4″ and 1/16″ bits, and lots of shredded newspaper.

I started by drilling about twenty evenly spaced 1/4 inch holes in the bottom of each bin. These holes provide drainage and allow the worms to crawl into the second bin when the castings are ready for harvest. After drilling, I took care to remove the sharp plastic ridges around the holes. I was thinking that if *I* was a slimy worm, I would probably not be stoked to crawl through such a sharp exit. Next, I drilled ventilation holes about 1 – 1 ½ inches apart on each side of the bin near the top edge using the 1/16 inch bit. I also drilled about 30 small holes in the top of one of the lids. I shredded about 4 weeks worth of Sunday papers and soaked them in a bucket to create the bedding. Worms need bedding that is moist but not soggy. After soaking the paper in water, I squeezed out the excess and fluffed it all up. I covered the bottom of the bin with about 4 inches of the newspaper strips. If you have any old leaves or leaf litter, that can be added also… I didn’t, but my worm sack was full of what looked like horse manure and leaf litter, so I figured that was sufficient. I also read that a handful of dirt was a good “grit” to help the worms digest their food, so I tossed that in as well. Finally, it was time to add the worms to the bedding! I was so excited when I opened up the sack I’d picked up at the nursery. The packaging said that my worms came from a place called Sharon’s Worm World (760-788-4423) in Ramona, California, and warned against using leaf mulch that includes oleander, foxgloves, or other toxic and poisonous plants. They will kill the worms straight away. Apparently, an earthworm can consume about 1/2 its weight each day. So if my daily food waste averages 1/2 lb., that will feed 1 lb. of worms. (2:1 ratio) Lastly, I cut a piece of cardboard, wet it, and placed it over the newspaper bedding. Worms love cardboard!!

I placed my bin on an old barbecue stand in a shaded part of the garden, but you could place your bin in any well-ventilated area like a laundry room, garage or balcony. Just make sure the bin is off the ground (either on blocks, or a frame) to allow for drainage. The lid of the second bin can serve as a tray to catch any moisture that may drain from the bin. This is the “worm tea” that makes a great liquid fertilizer. As the worms multiply, they will need food. I gently buried the food (Worms love breads, grains, cereal , coffee grounds & filters, fruits , tea bags , vegetables. Worms hate dairy, fats , meat , feces, oils.) in a different section of the bin each week, under the cardboard. The worms will travel towards the food scraps around the bin. Feed worms ONLY a vegetarian diet. 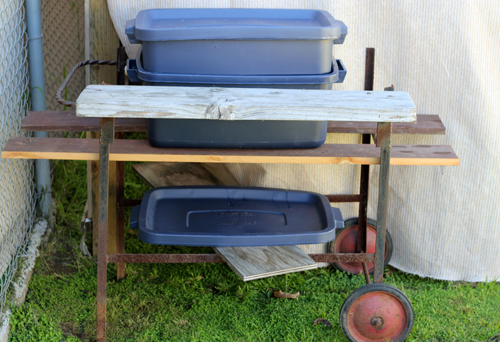 Good luck and HAVE FUN!!

For more information on composting with red worms, check out this link, and these awesome books:

New Uses for Useless Newborn Shoes
Warning: count(): Parameter must be an array or an object that implements Countable in /webroot/r/a/radme001/primary/www/wp-includes/class-wp-comment-query.php on line 399