Gardening Recipes
Craft Projects Photography
Mother’s Day was a few weekends ago, and this year I may have been a bit ambitious. 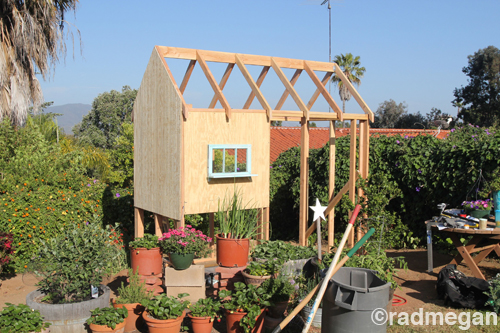 As I mentioned in my quilt post, I’d been wanting to take on BIG projects this year. So when my mom and I got to chatting about chickens, I offered to build her a coop over Mother’s Day weekend. I mean, HOW HARD COULD IT BE?! I had romanticized the task by comparing it to every barn-raising scene, from every movie I’d ever been to. (I see a lot of movies about barn-raising, don’t YOU?) In my head there would be lots of hard work, yes, but it would be edited down to a couple of days in the golden San Diego sun, sweating over a glass of lemonade, and building not only a coop- but memories with my family! Sounded pretty great. 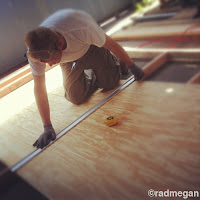 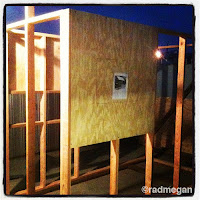 My husband is crazy handy, so I consulted with him on the scope of the project. Always up for a challenge, he agreed that a weekend construction project sounded like fun, but mentioned that he had never built a “structure” before, just shelves and tables, things like that. I once knew a man who worked construction and would say, “If you can’t build it right, build it heavy!” So I wasn’t alarmed by my husband’s lack of coop-knowledge. 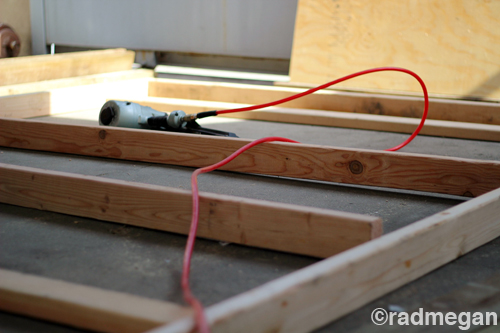 Thank goodness we had the forethought to pre-build the four main walls in Los Angeles and pack them into a borrowed truck before the three-hour drive south. 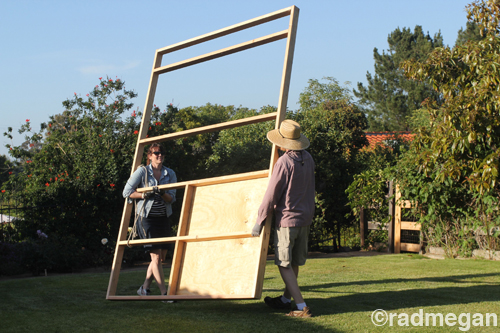 When we arrived at my parent’s house, we laid out all of the pieces, got a couple of curious looks from Howard the Pug… 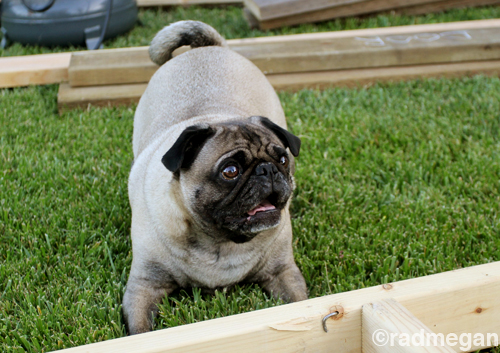 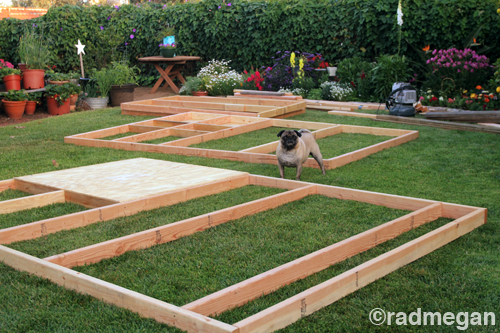 …and began to realize how much we had to do before these few framed walls became a functional coop.

My parents had leveled out a space in the backyard, but we still had to carve away more soil, and pack it down again until it was level. 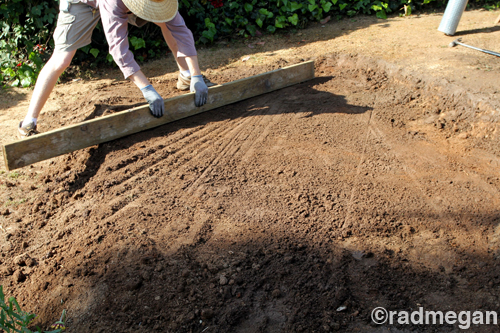 We laid the base frame down onto the level ground and realized that the space we had reserved for the walk-in door, was occupied by a lime tree. We made a few (mom-approved) adjustments and moved on. 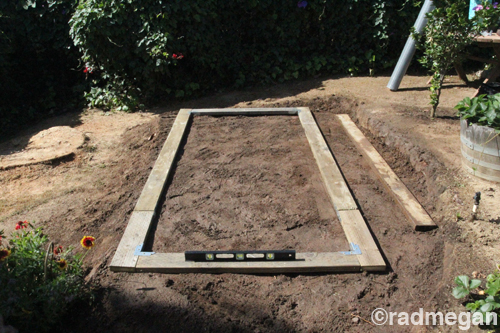 In the soft grass, we nailed half-inch hardware cloth to the underside of the wooden frame to protect against any below-ground chicken attacks.

Then replaced the frame (nailed side down) back onto the dirt. 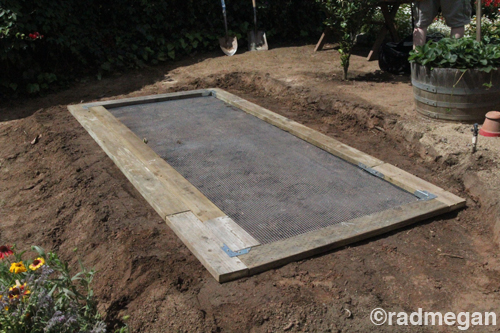 Putting the four pre-made walls up and securing them together was quick work and made us feel like we’d accomplished a lot. 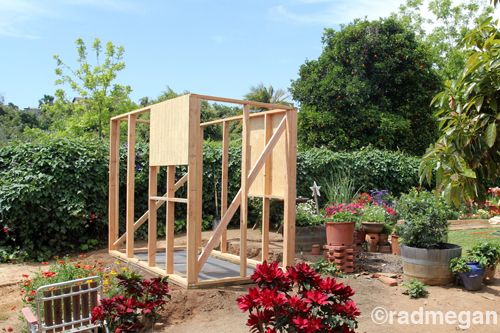 But that feeling was fleeting as we began to frame the roof… which we had only really conceptualized. 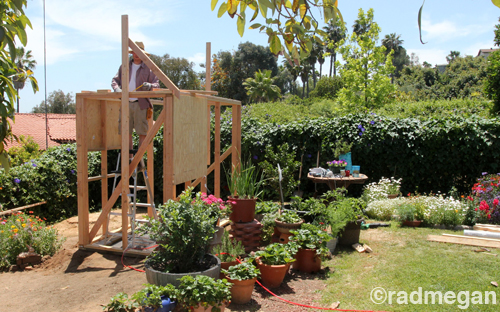 We’d pre-cut the beams in L.A., but putting them all together was SLOW work as neither of us had ever built anything of this scale before. 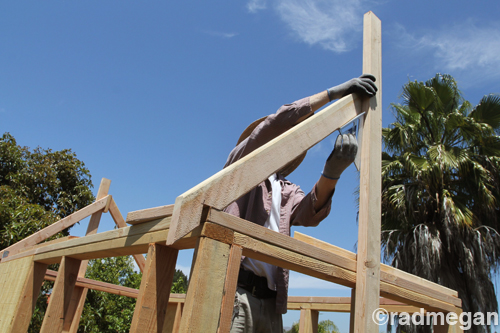 Once the rafters were up, hope was restored that we might actually complete the coop in our allotted timeframe (one weekend). 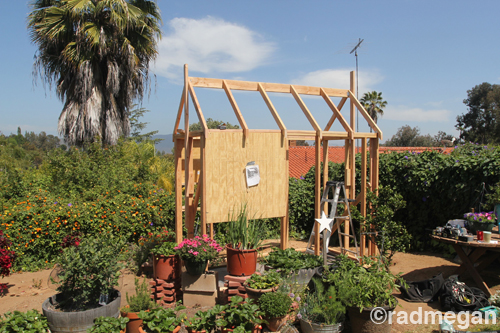 We used a snap-line on one of the final wall panels and made a few more cuts before screwing in the giant piece of plywood. 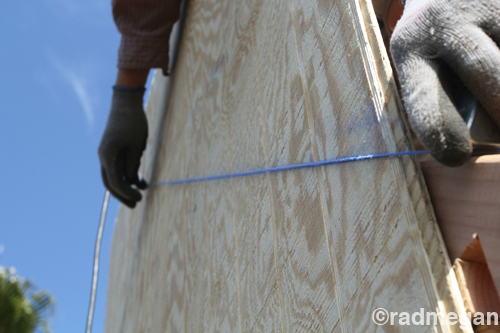 With the third solid wall in place, we cut away a section from the adjacent wall, and inserted a window my mom had been hanging onto for easy nest-viewing. 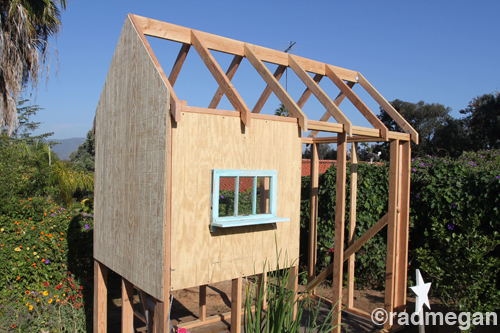 This was more hard labor than I had done in a long time, and around this point, I collapsed on the lawn and expected my brittle body to shatter like glass. 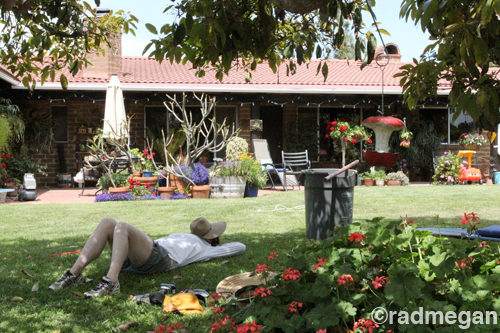 Surprisingly, my body didn’t break into a thousand tiny shards! After a hot shower, warm dinner with the family and a good night’s sleep, we were ready for day two of building! 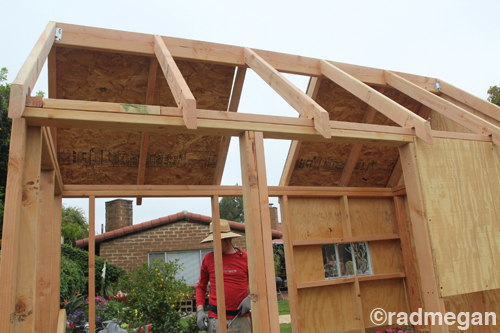 While my hard-working husband nailed the plywood sheets over the roof rafters, I started cutting and nailing down panels of hardware cloth to fully enclose the coop.

We still needed to think out the interior nesting box of the coop, and build out little egg-laying cubbies, but agreed (foolishly and incorrectly) that there would be time for that later. 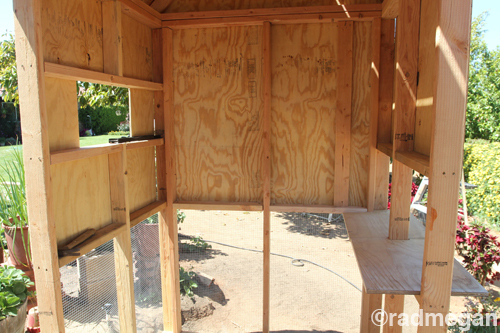 My new favorite tool after this project, is the electric tin snip my husband calls “The Nibbler.” 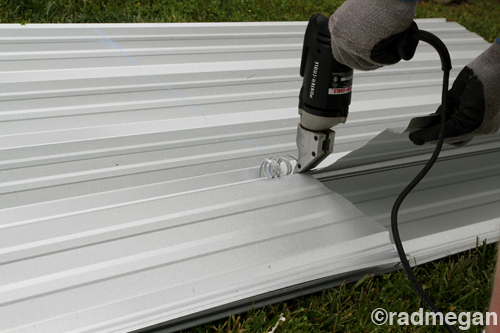 Cutting the panels of tin, screwing them down, and trying several solutions to cap the metal roof took FAR longer than we’d expected. 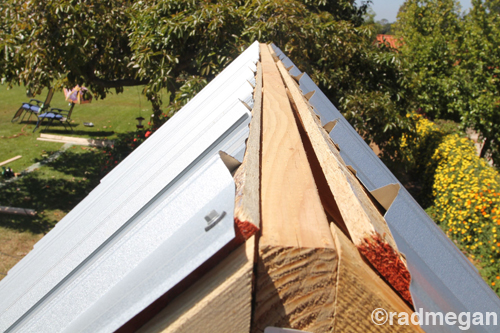 The day was nearly done before we knew it. No extra breaks were taken. Lunch was barely eaten… 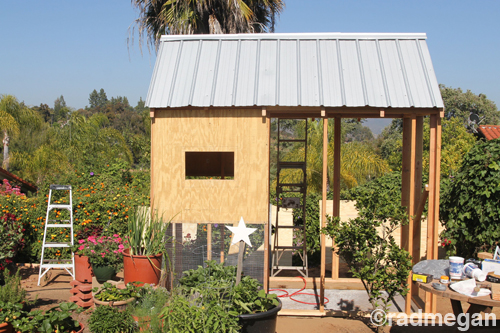 My dad got into the mix to help wrap the hardware cloth around the tallest walls of the coop when it started to dawn on everyone that we would not complete the mission at hand. 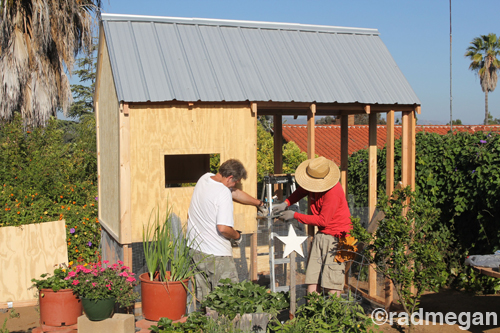 As far as “quality time with my family” went, my mom, dad and sister were around all weekend, but I didn’t get to enjoy their company nearly enough since the Mr. and I were either hammering away at something, or wracking our collective brain to overcome some new construction hurdle. It was really nice to just be near them though. 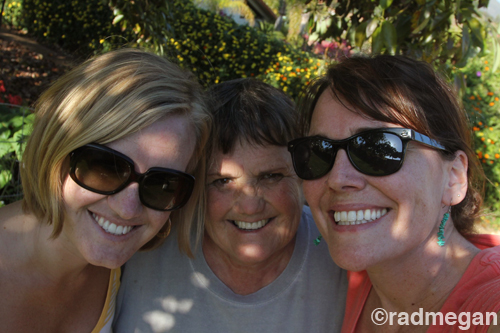 Sunday afternoon came far too quickly. If we had had one more day, we could have created the inner nesting box, and framed a door. But suddenly it was 7pm, all of our battery-powered tools had lost their charges, screws, nails and hardware cloth were used up with no left-overs, and we knew we were licked. 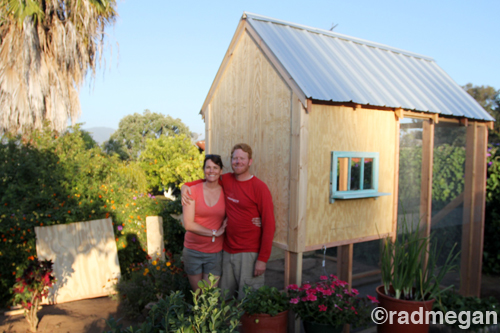 But my mom now has the START of a chicken coop, and the promise of another visit from us to finish the project. 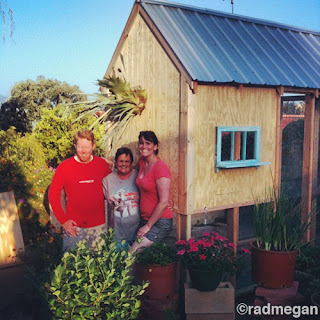 Did I think we would be picking out chickens, naming them and marveling at their lovely fresh eggs by Sunday evening? Maybe. But I’m not disappointed that we didn’t complete the coop. The entire structure measures 10 feet long, 5 feet wide and maybe 14 feet high. It was the first major “craft” project that my husband and I worked on together and it’s basically bomb-proof.
Most importantly, it was a way for me to show my mom how much I appreciate all she’s done for me; the love and encouragement, the support, and the crafty genes she passed down. I wanted to give something back to her as a thank you, to encourage her hobbies, and give her a reminder that she is the best mom ever! I love you mom!
Happy Mother’s Day again- and I can’t wait to come back and finish the coop!
***SEE PART 2, THE COMPLETED CHICKEN COOP, HERE. ***

The Birth of the PMS Cupcake
Warning: count(): Parameter must be an array or an object that implements Countable in /webroot/r/a/radme001/primary/www/wp-includes/class-wp-comment-query.php on line 399