It’s been some time since my last post. There were, what seemed like an overwhelming amount of personal challenges going on at home and with people dear to me. Without getting into it (because, are you even really even reading this AND doesn’t every person face rough patches in life that knock us down and make us reevaluate where we are and who is most important to us?) let’s just say, I’ve had a couple of rough months.

Fortunately, I had several cathartic, metal-twisting projects to work on during my online absence. The first one I’m happy to share with you this week, is how to make a chicken wire sculpture. I created this project for eHow, so swing on over there if you want to see the entire how-to. 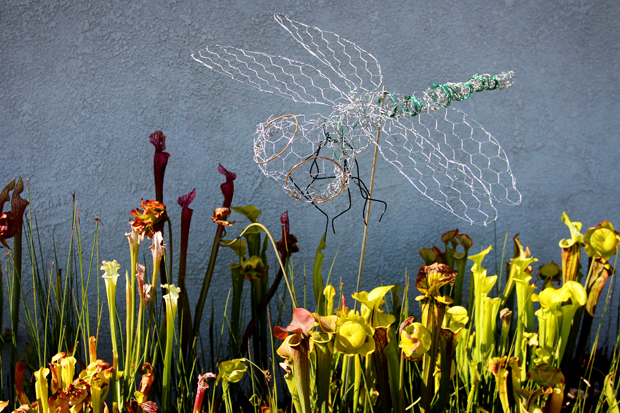 I chose to make a dragonfly because a few years ago, we had a pool in our yard (the inflatable, ghetto kind) that we just stopped using. The cover on the pool gradually became sun-beaten and ripped. One day, after nearly a year of inactivity, I (brilliantly) decided to go for a swim (hot weather impairs my judgement). It was late in the evening and the light was low. I thought I saw something darting around in the pool as I removed the cover, but shrugged it off. The water felt off. It was slimy. I swam around a bit and then got out. In the morning, I went to look in the pool to investigate the odd viscosity. To my shock/awe/horror/amazement, it was filled, and I am not exaggerating, with THOUSANDS of dragonfly nymphs. I had seen a disproportionate amount of dragonflies around the garden that year, but assumed they were attracted to the water table I grow my carnivorous plants in. I was wrong. Our year-old abandoned pool had become an eco-system, and healthy breeding ground for countless dragonflies. Needless to say, I showered a disproportionate amount of times that day.

So the chicken wire dragonfly? He’s a little reminder that life goes on. And that things that are left untouched and abandoned, will sometimes find a way to carry on without you!

Stuck On You: A Valentine for Garden Lovers

Kirst Aid Felt Tissue Box Cover for eHow
Warning: count(): Parameter must be an array or an object that implements Countable in /webroot/r/a/radme001/primary/www/wp-includes/class-wp-comment-query.php on line 399