I created this tutorial for the now defunct magazine, Kids Craft 123, last February. I loved this project so much, and have been getting so many requests for the tutorial, that I thought I’d share the steps with you here for a last minute Valentine’s Day craft with kids! 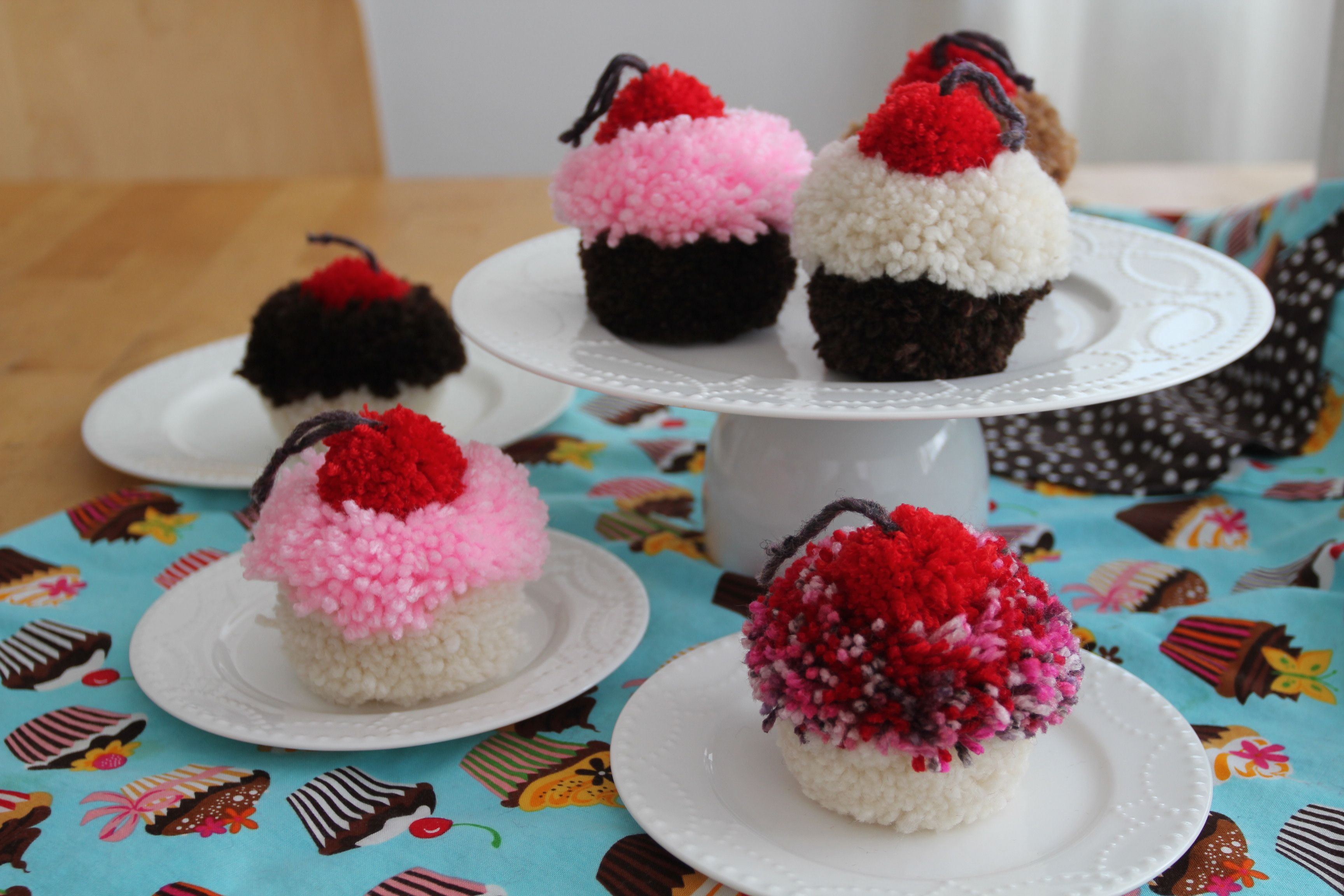 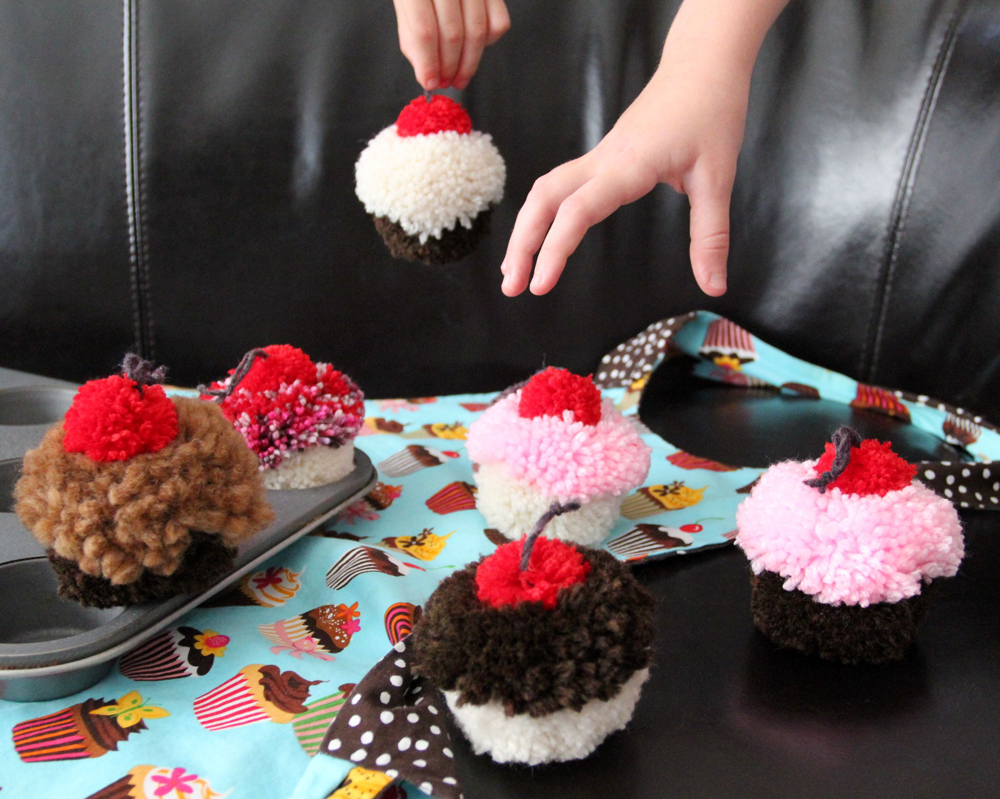 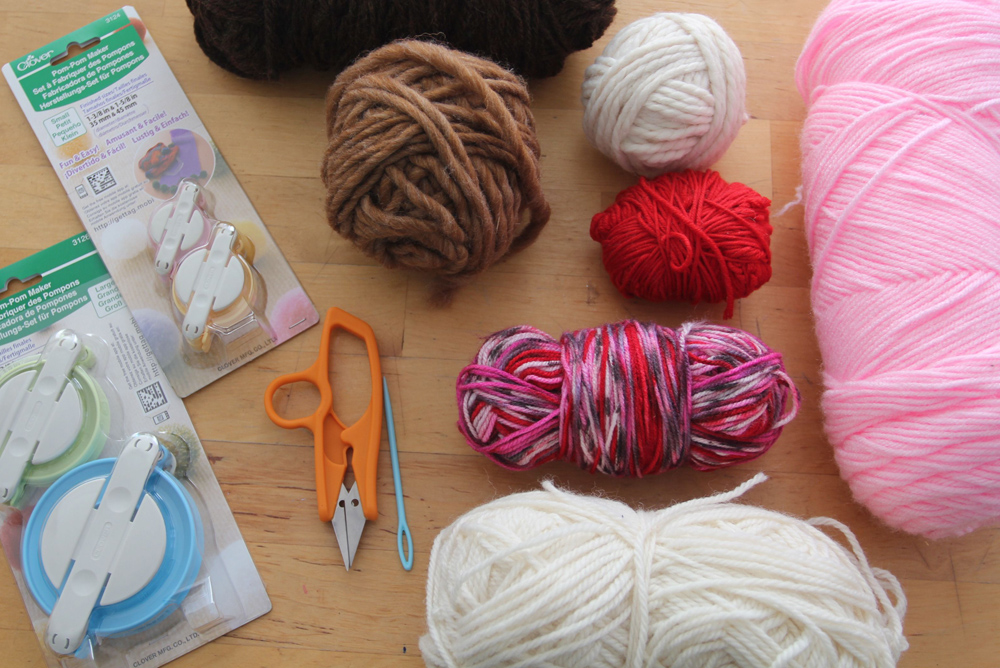 From drawing a picture, to giving a big hug, there are many ways to tell someone you love them. Baking cupcakes can be a sweet gesture, but if your kids are not able to use the oven yet, making pom-pom cupcakes is a great alternative! 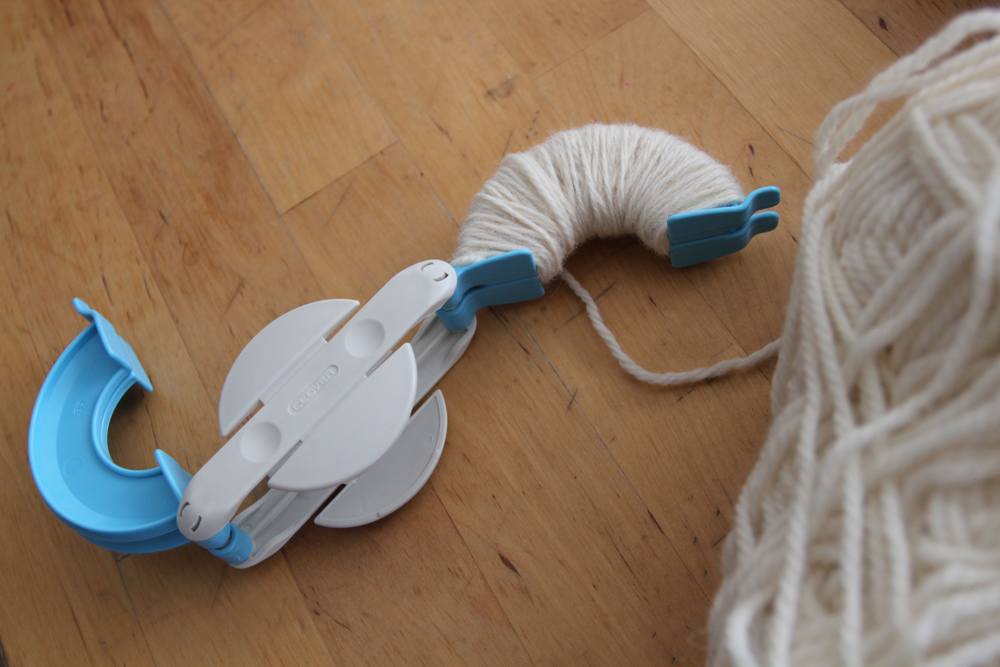 The Basics:
Select two colors of yarn. One will be the “frosting” and one will be the “cake.” White yarn is perfect for vanilla, brown for chocolate, pink for strawberry, etc. Reserve a ball of red yarn for your cherry on top. 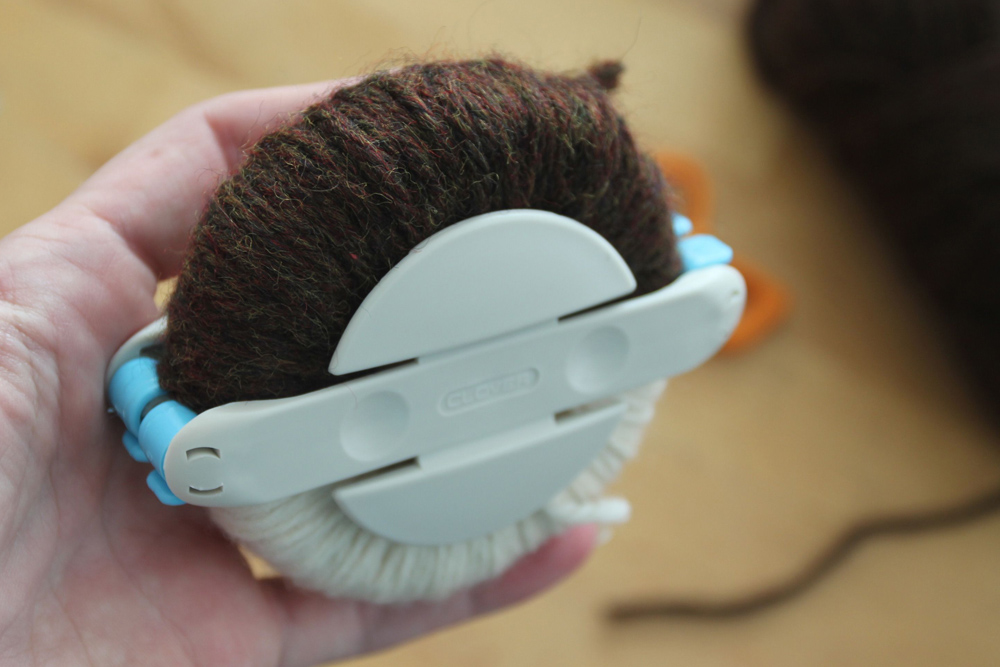 Use your scissors to cut the yarn along the gutter of the pom-pom maker. 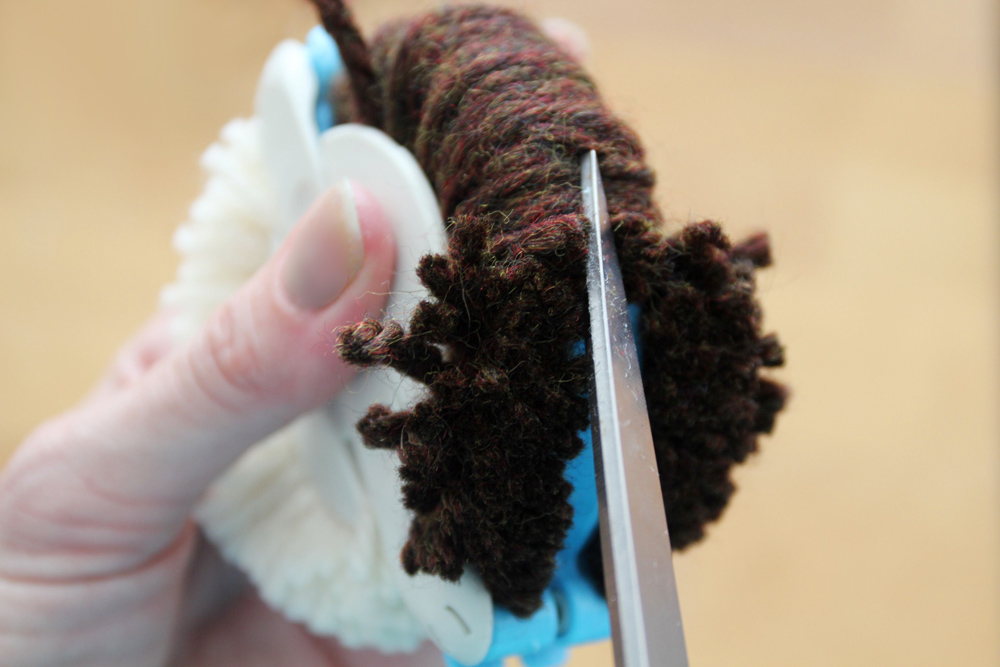 Cut a length of yarn and wrap it around the gutter of the pom-pom maker where you just snipped. Knot the yarn a few times to ensure a solid pom-pom. Carefully remove the plastic pom-pom maker to expose your two-toned pom-pom. 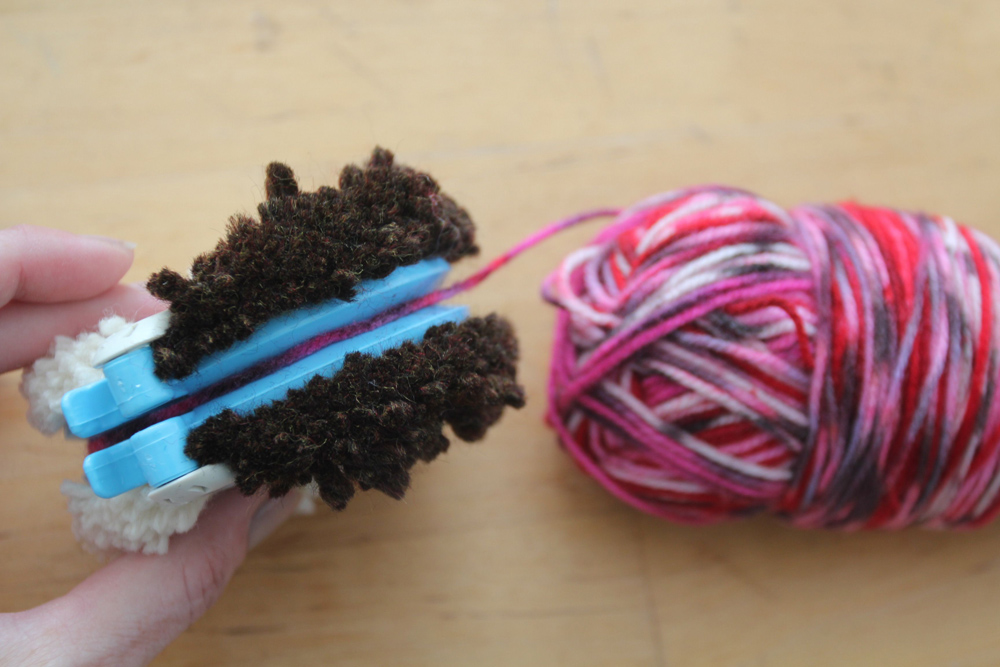 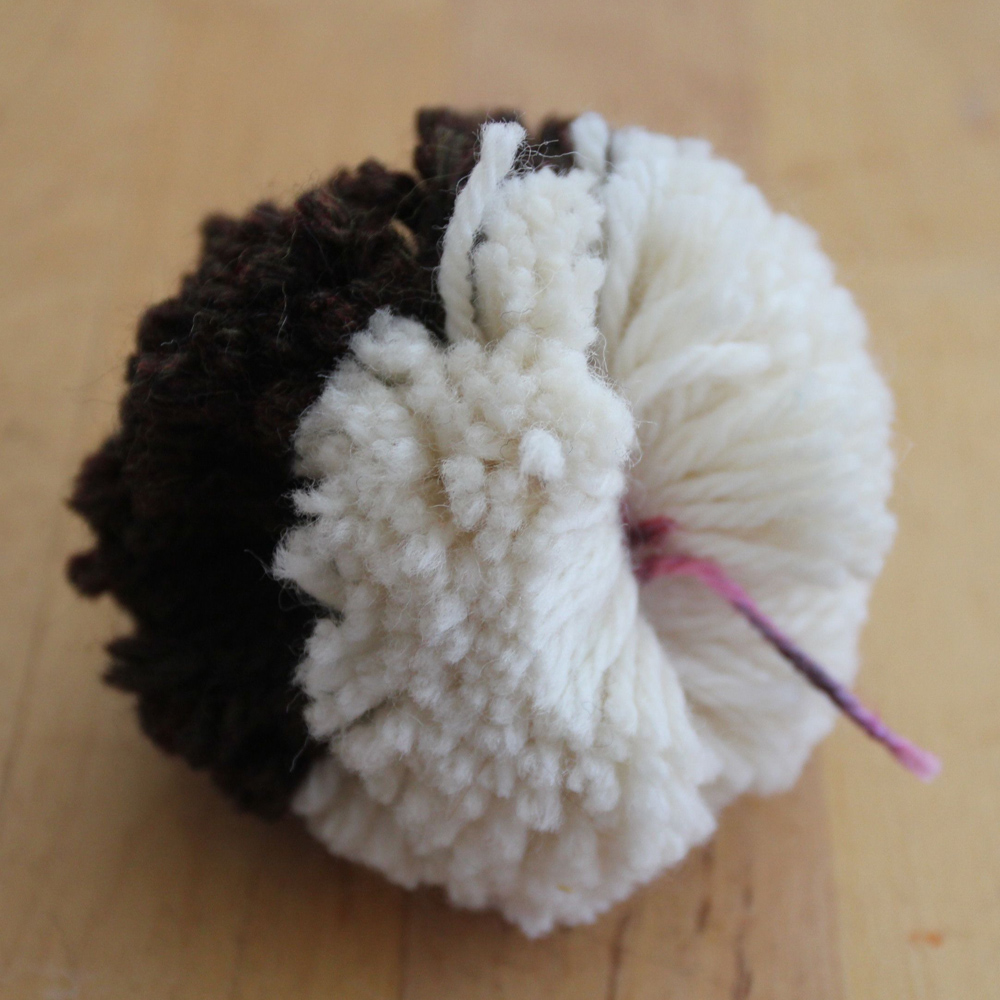 Decide which side of your pom-pom will be the top of your cupcake (the frosting) and which will be the bottom (the cake.) 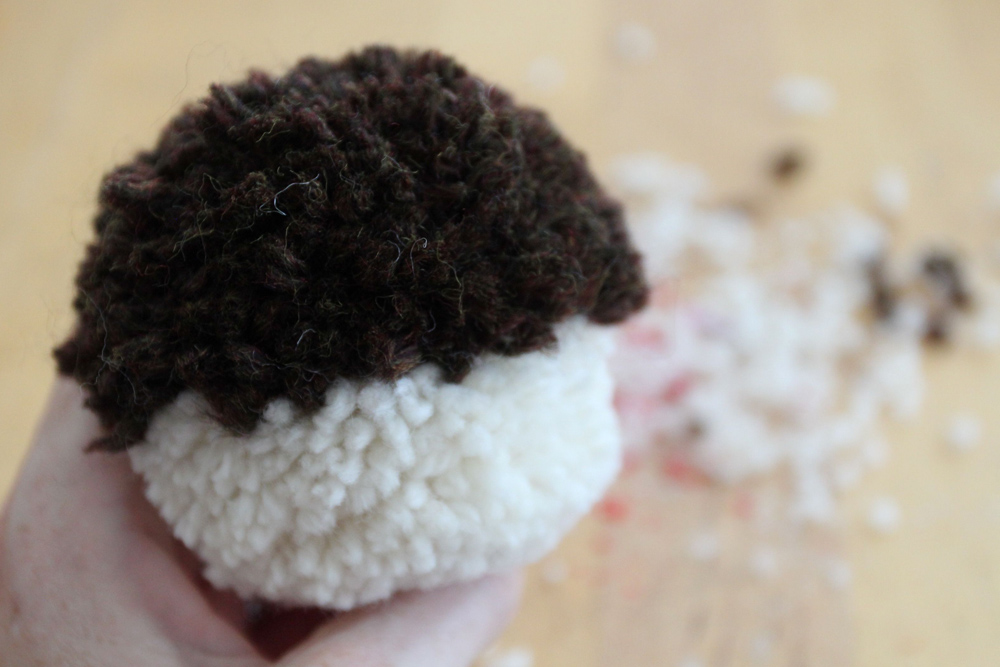 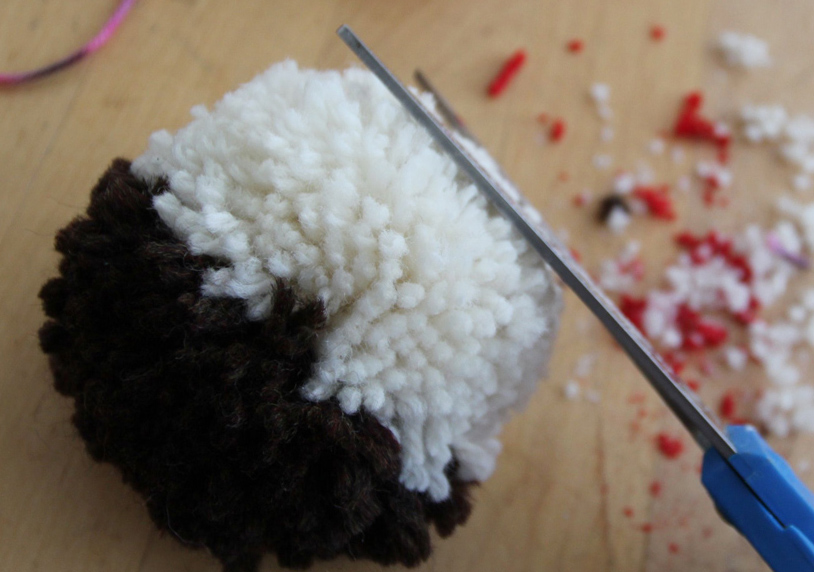 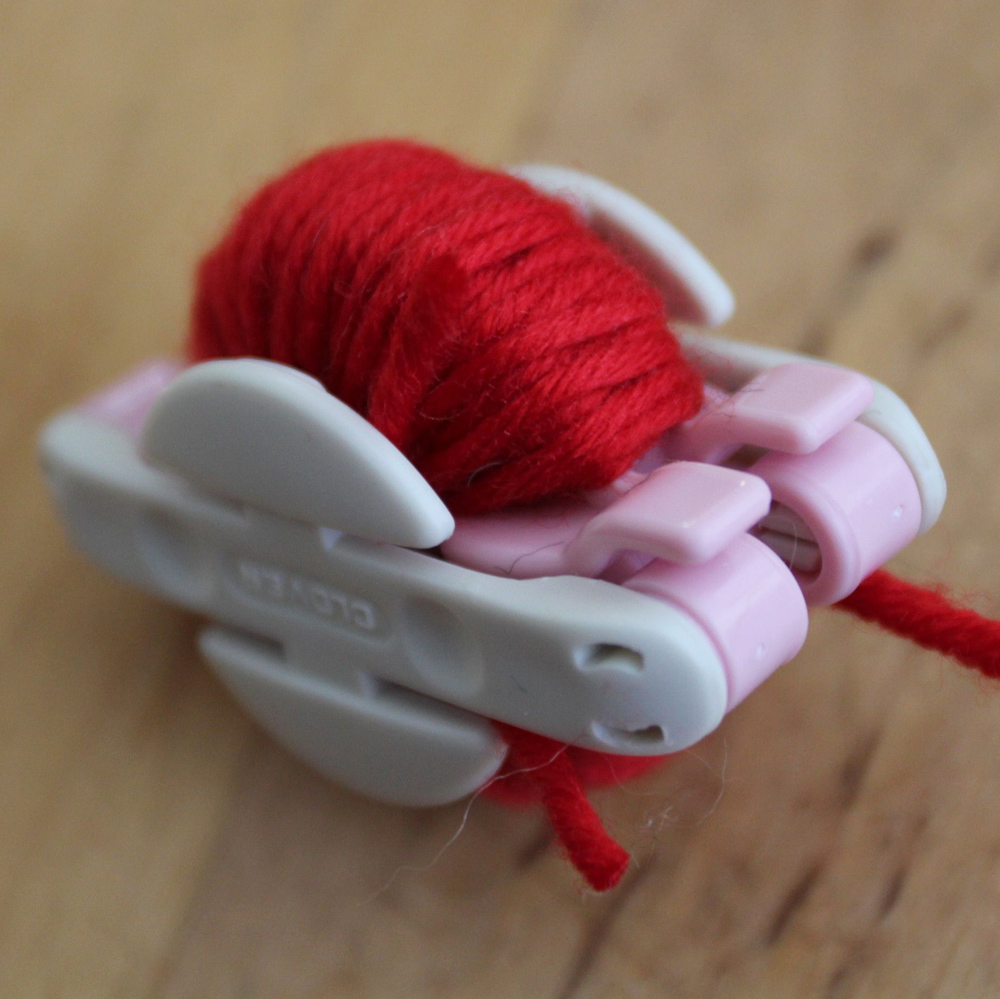 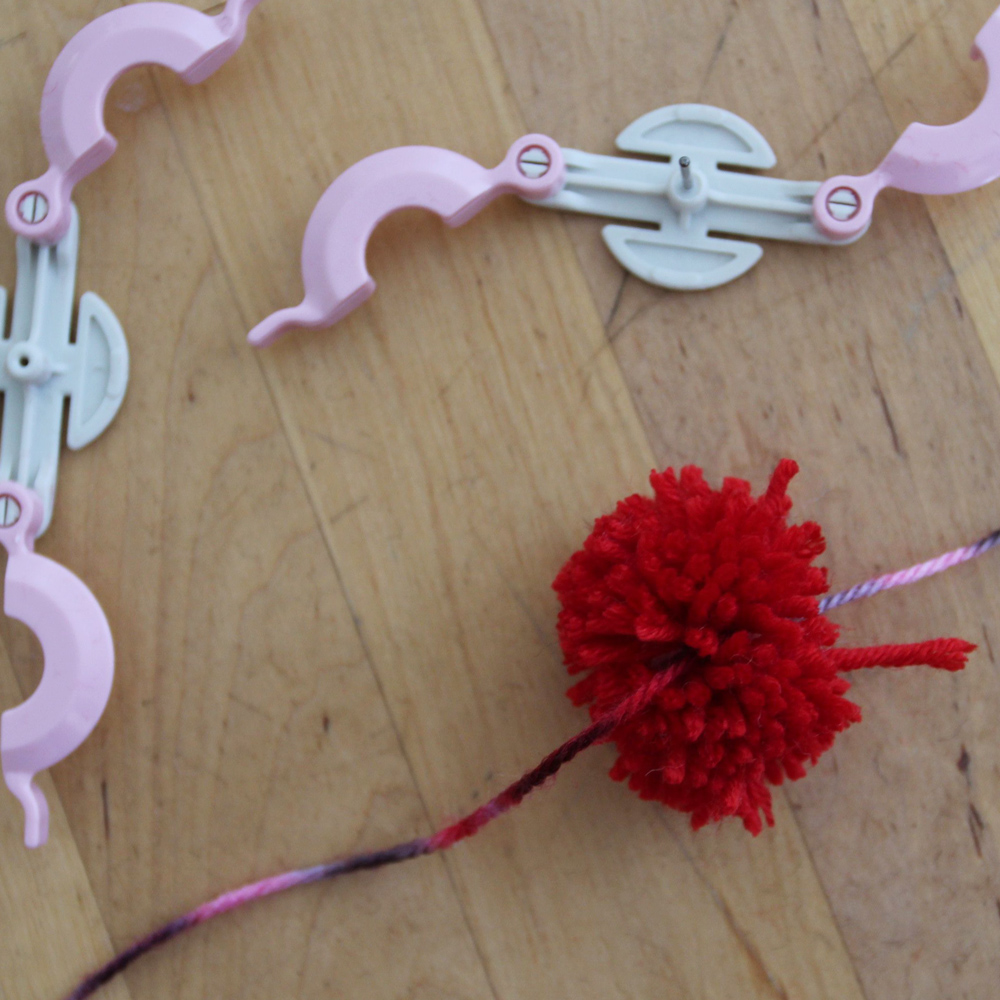 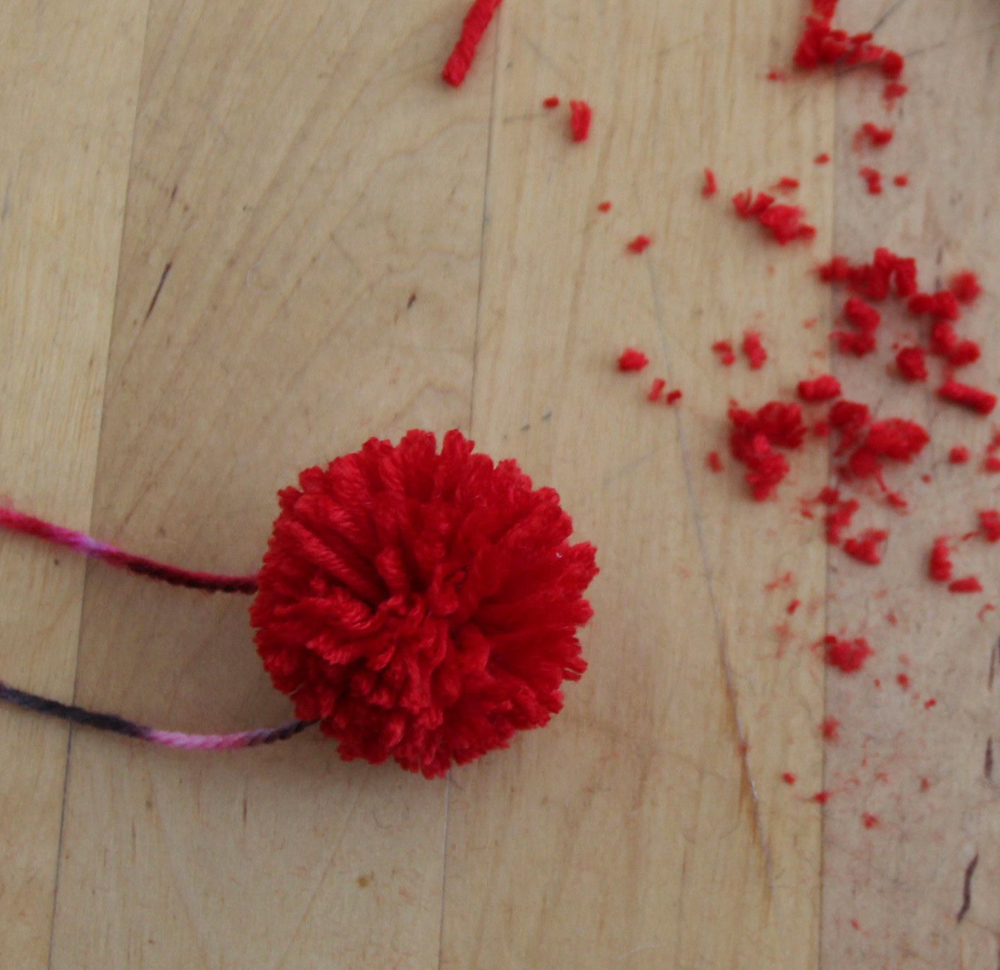 Once you remove the pom-pom from the maker, trim it with your scissors so that it is a perfect ball. Thread the plastic yarn needle with brown yarn and run it through the red pom-pom. Knot the ends of the yarn together and trim the excess. 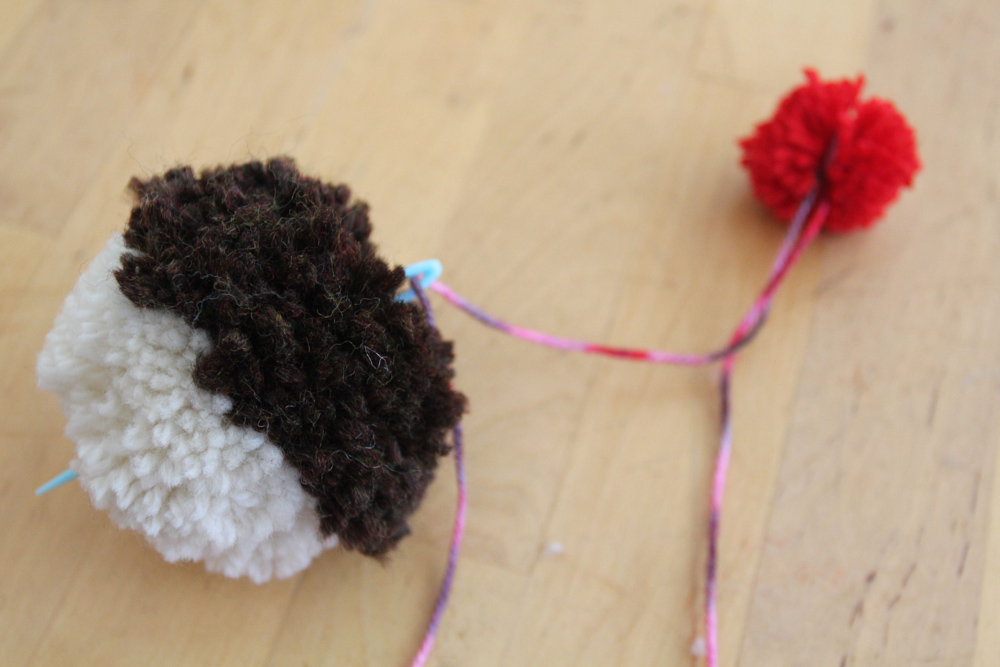 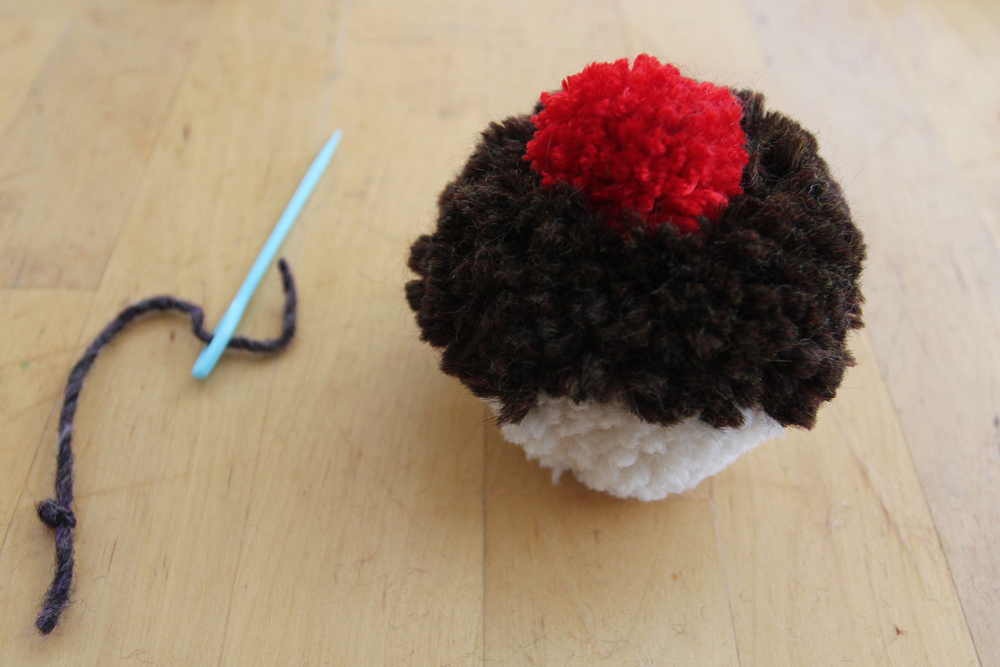 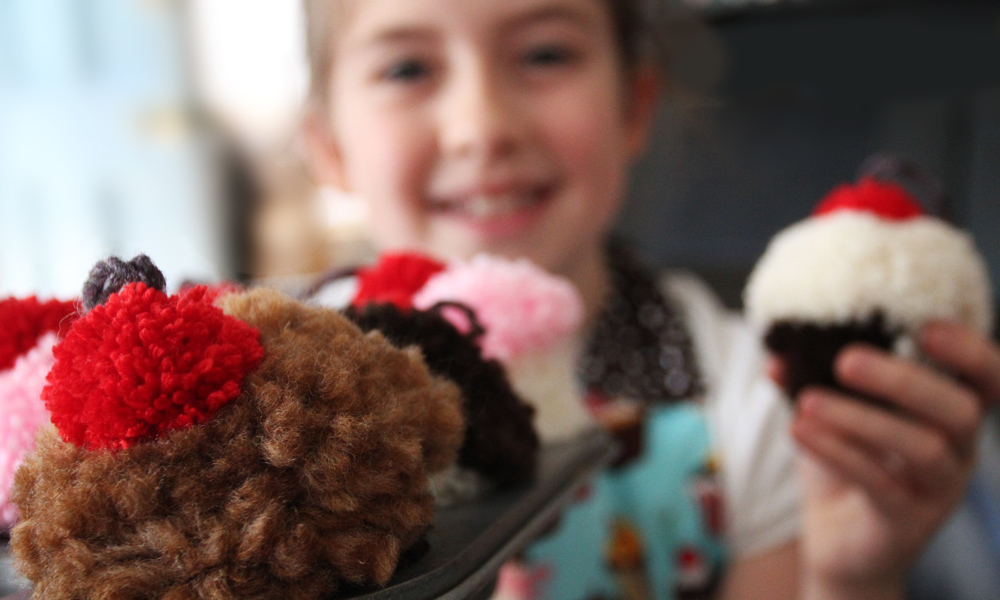 Kirst Aid Felt Tissue Box Cover for eHow
Warning: count(): Parameter must be an array or an object that implements Countable in /webroot/r/a/radme001/primary/www/wp-includes/class-wp-comment-query.php on line 399