Looking for a holiday gift for the crafty friend who has everything? Look no further than, CraftFail: When Homemade Goes Horribly Wrong. Author Heather Mann beautifully compiles some of the most epic fails out there, and yet somehow manages to do it in a totally relatable, completely hilarious, and somehow, wholly light-hearted way. 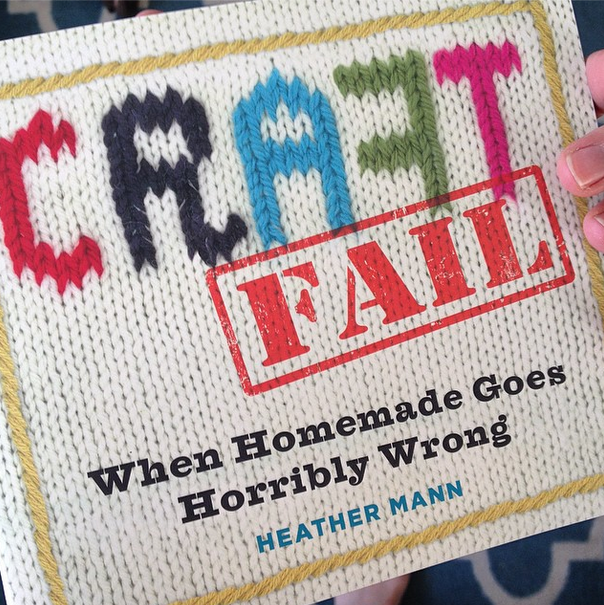 Heather is an amazing lady, business woman, crafter and mom. I respect her 100% and was honored to be one of the fails within her book. I had the opportunity to ask Heather a few questions about the book and failing in general and here’s what she had to say.

Do you have a favorite Fail from the book?
(HM) I’m gonna go with the Rainbow Layer Cake epic fails because there are several different fails, and they all failed in different ways. A rainbow cake is so tempting to try because when it succeeds, it is so pretty! We had a bunch of rainbow food fails in the book.

What would you like people to take away from the idea of championing a CraftFail?
(HM) I would love it if people would let themselves off the perfection hook and enjoy the learning process. Failure is an important part of learning, and it doesn’t mean you are bad, just that you are still developing your skills. Learn everything you can from failure and do better next time.

What’s your favorite type of craft to work on?
(HM) I like anything with unpredictable results, like tie dye, soap making, or (today) water marbling (which I totally biffed, by the way).

What type of craft project produces the most Fails for you personally?
(HM) Anything that requires absolute precision is hard for me to master because I’m more of a fudger than a measurer.

What other industry would you like to see a series of Fails from?
(HM) Jeez, pretty much anything! I guess those Wide Wide World of Sports Bloopers have been around for decades, so someone figured out that people like to watch fails a long time ago. How about fashion designer fails? I would love to see Project Runway, fashion fail edition.

Pick up at least two copies below- you’ll have a hard time giving away this awesome read.