Around 1995 my best friend gave me a book published through the Metropolitan Museum of Art called “Art & Love, an Illustrated Anthology of Love Poetry”.

I poured over this book, dog-earring pages, writing notes in the margins, tattooing the poems on the insides of my eyelids and associating them, in a Pavlovian fashion, with the paintings and illustrations they shared a page with. A decade after receiving the book in fact, I ran across the Jean Baptiste Camille Corot painting entitled “The Letter”, and began reciting “Farewell Ungrateful Traitor” by the English poet John Dryden.
Of all the poets and paintings I was ever enamored with, there has been one I followed, collected, and obsessed over more than all the rest. 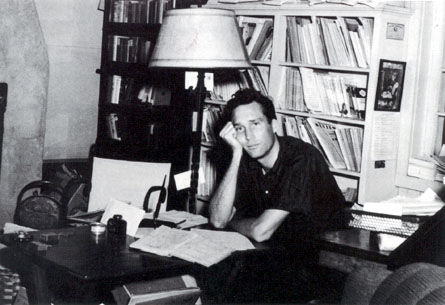 James Laughlin was perhaps better known as a publisher and founder of New Directions, but his writing was what carried me through my twenties on a cloud. I enrolled in a Latin class in college to decipher some of his earlier, Latin-laden work.  Dead language? Not for me! This was my life. When I worked at the front desk of my local library, I would spend down-time doing research/borderline stalking him. I still have a doodle from my library days that says, “James Laughlin! STILL ALIVE!!!!!” with hearts and rainbows drawn all over it.  Unfortunately he passed away in 1997, but I wouldn’t learn this fact for another year, and in the meantime would blissfully fantasize about taking a cross-country train ride to Connecticut, where we would meet accidentally in a coffee shop, he would observe me from a distance reading something brainy and looking irresistible, scrawl out some fresh masterpiece on a napkin, and even at his advanced age, seduce me the following day. This was, and is how my brain works. During my own bad romances, I would escape into his words. I would refer to certain passages and wonder if I was his type.
James wrote poems about all sort of scholarly things. He was well educated and came from an era of sophistication. And then of course, there were the torrid, fleeting tales of love, lust, and stolen moments in the back seats of cars. He married a few times, took many lovers, was an avid skier, and close friends with Kenneth Rexroth, William Carlos Williams, and Ezra Pound. I would imagine us skiing together, wearing Scandinavian-patterned sweaters, and sitting around a fireplace in a snowy cabin, listening to the latest works from his famous friends. 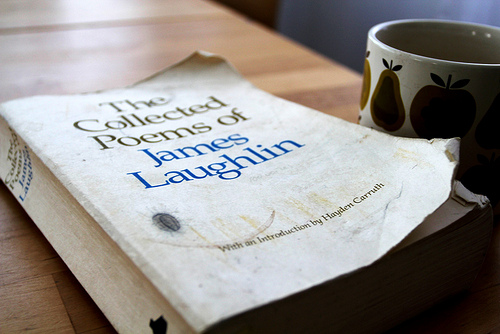 When I open the well-traveled, and cotton-soft copy of his collected works now, I can still produce most of the poems off the top of my head, but flipping through the pages is more like flipping through a photo album of places we traveled, things we ate, and a life I lived with my favorite poet, and for so long, my favorite man. I wish I’d met you just once James Laughlin.

James and the Giant Peach… Juice
Warning: count(): Parameter must be an array or an object that implements Countable in /webroot/r/a/radme001/primary/www/wp-includes/class-wp-comment-query.php on line 399